here is the long waited chapter~!
hope you guys enjoy it. I know I did, as well as the proofreader.
Megaupload
Online Reader

well. wish me luck to get this job. I really need it :/ 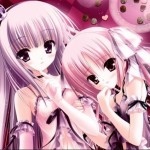