I guess we will continue this after all.  The first several chapters just appeared in tankobon form, and we will have it in our hands in a few days.  Since this particular series is serialized to the web, and the images shown in the company viewer are rather low resolution, they were very difficult to work with for scanlation.  Having it out in tankobon form changes things drastically for the better.

The series is now out to chapter 7 on the web, and is continuing to introduce new characters and situations. 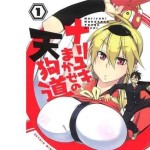